A year ago, on Christmas, the Afghan Times reported an airstrike in the Kapisa province of Afghanistan with six civilian casualties; including a woman and a child. To this day, what happened the day of this incident remains unknown — like many other airstrikes. However, unfortunate as it is, airstrikes with civilian casualties are not unheard of in Afghanistan.

A recent study from the US shows that the number of Afghan civilians killed in international airstrikes has exponentially increased by 330% since 2017. Despite this, thorough investigation into these strikes is deemed quite difficult. Some underlying reasons for such a predicament include a lack of transparency from the active forces in Afghanistan and the dangers of on-ground reporting.

Therefore, when The Bureau of Investigative Journalism began a crowdfunding campaign with Bellingcat to investigate airstrikes in 2019, it did not come as a huge surprise. The Bureau has been investigating these events in their Shadow Wars project for years. And open-source data has proven to be a valuable asset in such cases.

I was one of many volunteers who came together to investigate 21 such airstrikes that claimed civilian lives. Volunteers persisted for weeks, searching the internet and scouring satellite imagery, in search of tiny details that would prompt possible answers. While some cases progressed to reveal more, we got stuck on others.

In this post, I revisit one such case we couldn’t fully resolve — an airstrike in Kapisa province on the eve of Christmas 2019.

The alleged airstrike happened on December 24 in the Nijrab district in the Kapisa province, where Taliban fighters were using civilian homes as strongholds. At least two Afghan media outlets reported six civilian casualties, including one child and two women.

Within one or two days, numerous pictures and [trigger warning] one video from pro-Taliban channel Al-Emarah, were circulating on social media showing the alleged aftermath on the site.

Panorama; created from stills of the Al-Emarah video.

Kabul News TV showed a video report that includes different footage from the alleged site in their broadcast on December 25. The broadcast reported an operation by Afghan and foreign forces in which 4 civilians were killed and another 4 injured.

Only two forces do carry out airstrikes in Afghanistan - the Afghan and the US air force. Both forces have been named by sources in the reporting. The Afghan MoD confirmed the news of an airstrike in the Nijrab region on the morning of the 24th. However, it should be noted that the timestamp predates the timeline reported by the media.

An airstrike in Kapisa has also been reported by US forces but it is listed under the airstrikes that occurred on December 23rd. Hence, it’s unclear if this too can be associated with the alleged airstrike which, according to Afghan media, occurred on December 24th. Nevertheless, the notices indicate that both forces were active in that specific region around the same timeline. 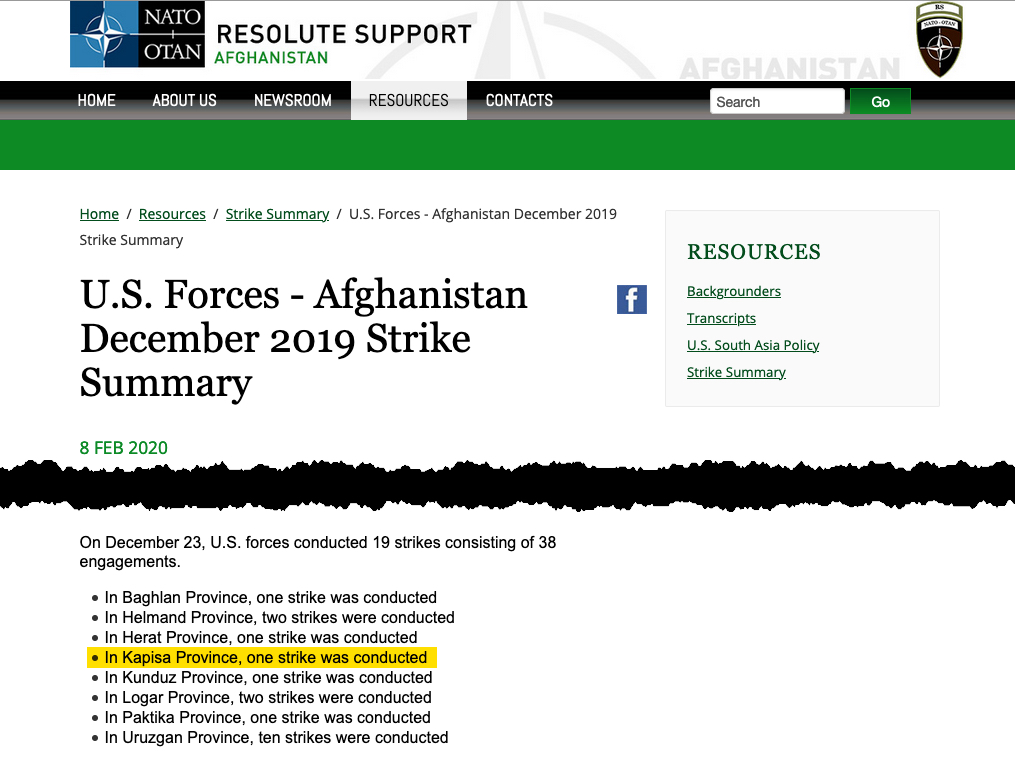 Strike summary on the Resolute Support website. The page has been taken offline but can be found in archives.

The Nijrab district in Kapisa is easy to locate while Dara-e-Afghani, on the other hand, is harder to pinpoint on the map. One news outlet described the place as ‘Afghahniya Valley’ which corresponds with Afghānyah/Afghaniah, a village found in several geographical databases, and is located about 4 kilometres east of Nijrab.

The Al-Emarah video presents an impression of the site, but unfortunately, it does not reveal much about its surroundings. A part of a mountain ridge from behind a wall is visible in the recording, and this mountain ridge closely resembles Google Earth’s terrain view, towards south from within the valley. Sadly, other snippets of mountains in the video are too minimal for comparison, but they aren’t conflicting either. This finding reduces the research area to a specific part of the valley.

Terrain view in Google Earth as seen from the 'Afghahniya Valley'. | Imagery Google Earth. Inserts taken from imagery on social media and the Al-Emarah video.

Another detail used to further narrow down the research area is the position of the sun in the video. The long shadows indicate a recording time close to sunset or sunrise, but the sun is also seen in a position close to the top of the wall, from the camera’s perspective. Would it be possible to estimate the position of the sun and draw it out on the map to get closer to the site?

The altitude is the more challenging. The wall, the sunbeams and the ground (on which the video is being recorded from) can be seen as a right-angled triangle. If the distance to the wall and the height of the wall are known, the angle between the horizon and the sunbeams can be calculated with trigonometry. To rule out some error, minimum and maximum values are used for the estimates.

After analysis of the imagery, it can be assumed that the individual holding the camera was standing approximately on the same level as the first floor. From there, the height of the rooftop is estimated to be a minimum of 2.5 meters and a maximum of 3.5 meters. The approximate distance to the wall is obtained by counting the wall bricks horizontally and vertically, and then using an equation with the estimated height of the wall. Resulting in the following diagram after putting these measurements together. 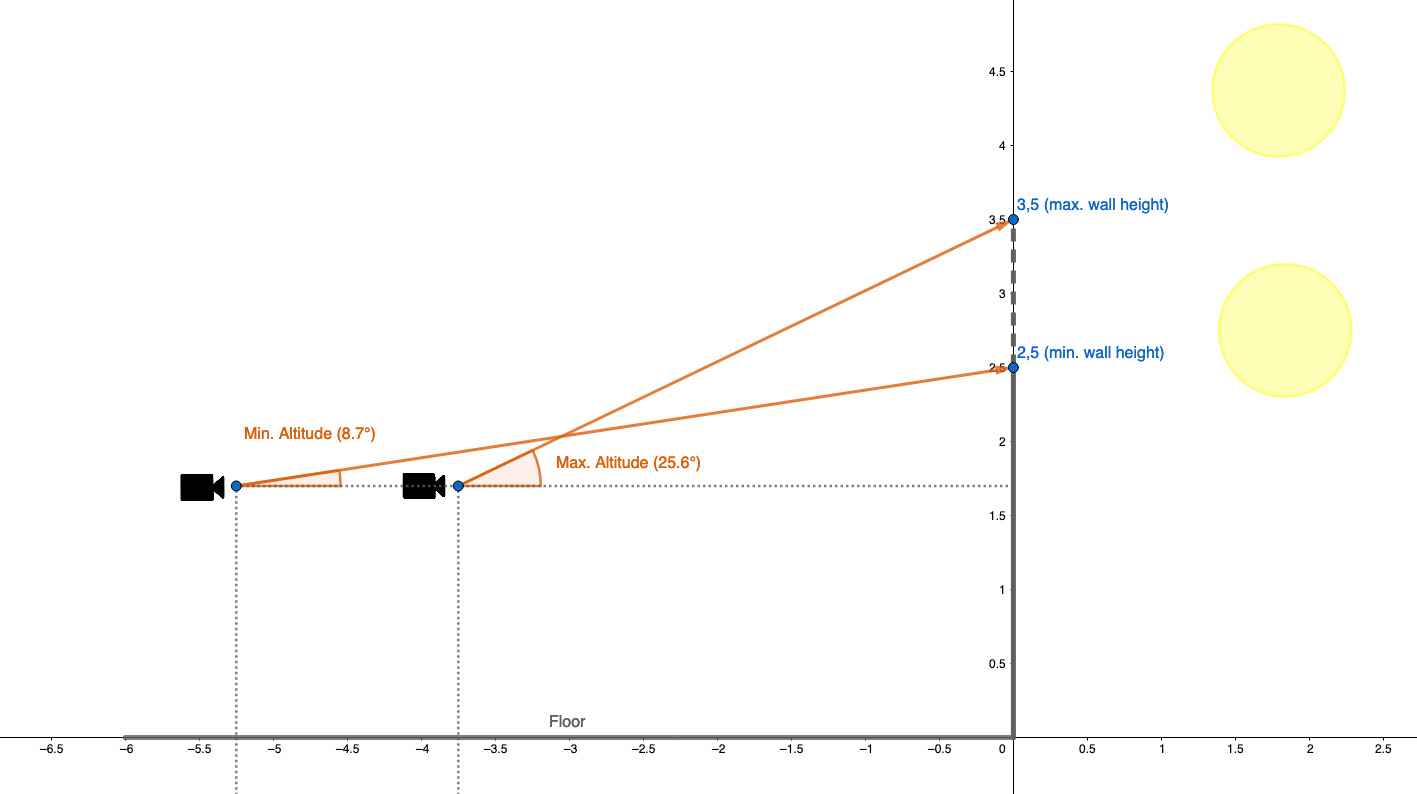 A schematic representation of the scene when the sun is visible at the top of the wall. Dimensions in meters.

Putting the dimensions from the diagram in a sine function results in a minimum altitude of 8.7° and a maximum of 25.6°. SunCalc can now be used to find out the corresponding time and azimuth angles in the valley on the suspected date. This results in a possible recording time between 07:51-09:51 and two angles that can be put on the map.

The relative distance between the two hilltops and the sun in the video can be used to position the angles on the map. Measuring the pixels between the sun and the hilltops and a simple equation results in a scale for positioning the sun on the map.

We are unaware of the angle between the camera and the hills, but it appears perpendicular when compared to Google Earth’s terrain view. Therefore, a line parallel to the valley is used to scale the distance between the hills and sun on the map. 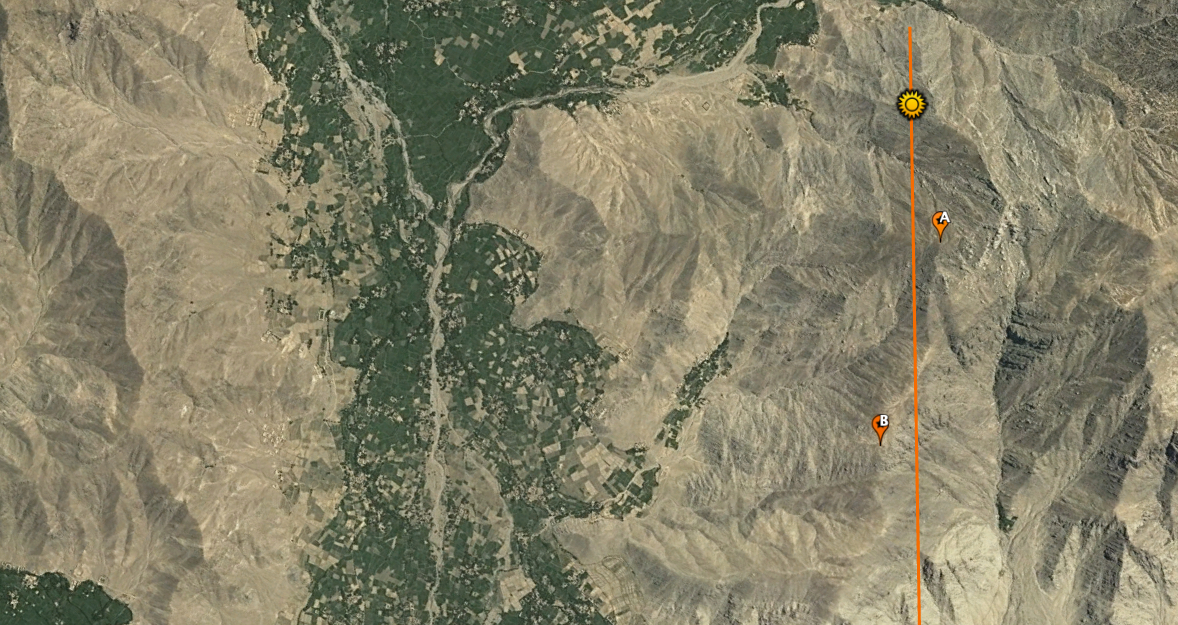 The sun is positioned on the map after scaling the relative distance between the hills and sun. The Afghahniya Valley can be seen towards the left, while the village is in the lower part. | Imagery courtesy of CNES / Airbus

Drawing a line through the sun at angles equal to the azimuth angles from SunCalc results in an area that can now be investigated. 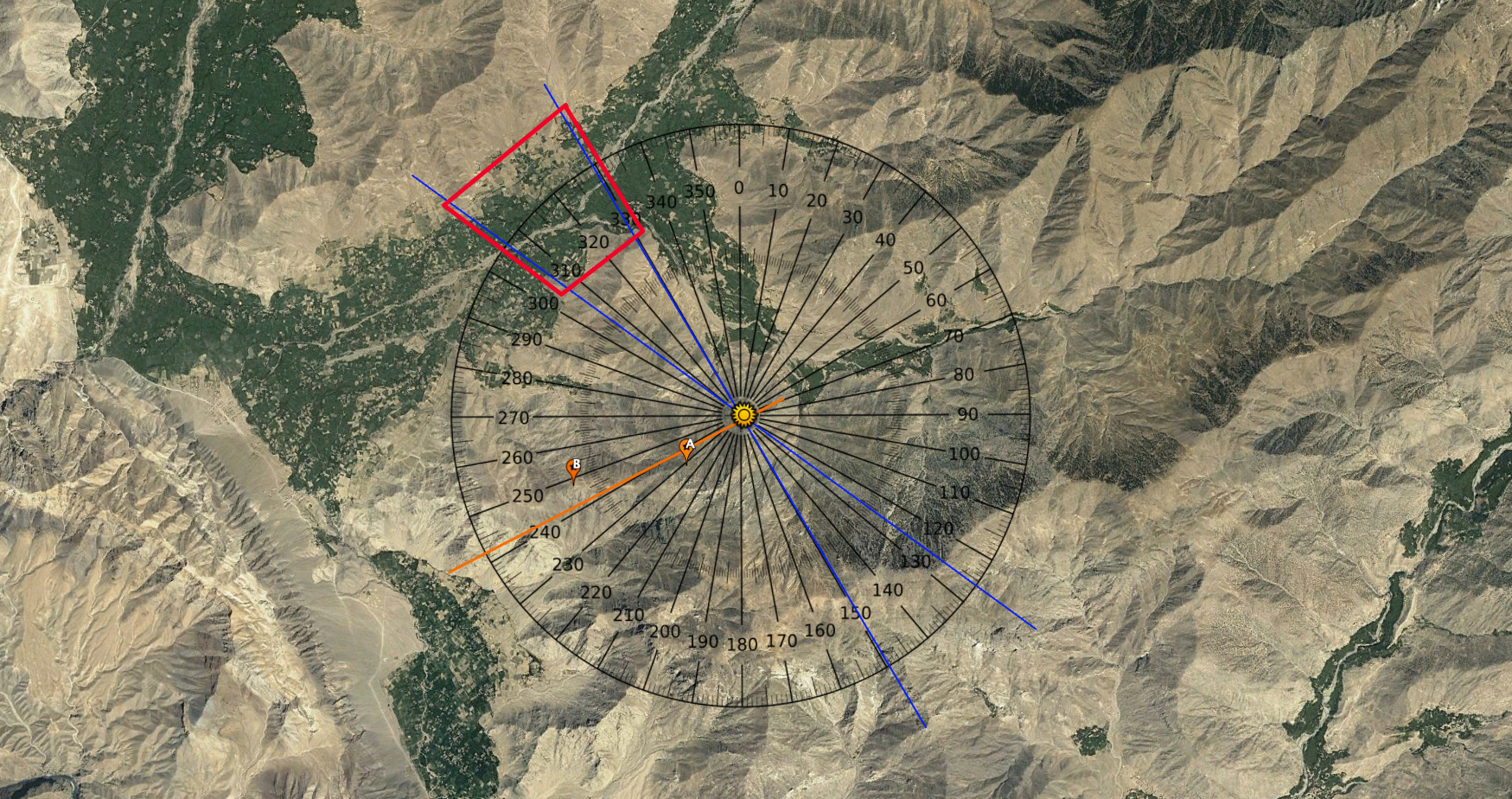 The red box signifies the area to be investigated, delineated by the sun's position between 07:51–09:51. | Imagery courtesy CNES/Airbus/Google

Is this the compound?

Considering the orientation of the sun and two visible courtyards in the video, there are a relatively small number of sites to be checked. It can be noticed that one compound near the centre of the area closely resembles the site in the video. 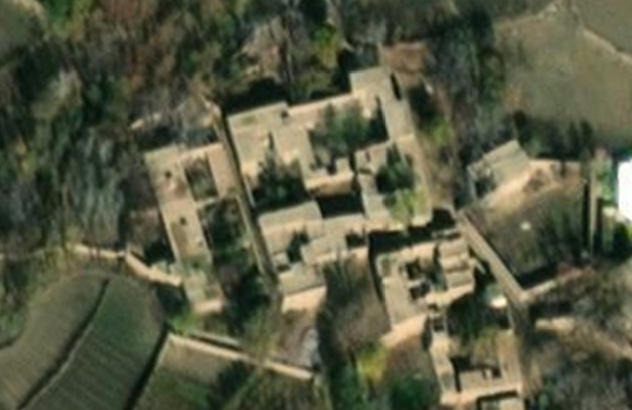 If this is indeed the site of the alleged incident, the video might have been recorded from the eastern part, towards south and west. Despite the poor quality, rotating the imagery until it aligns with the camera angle reveals several comparable details. 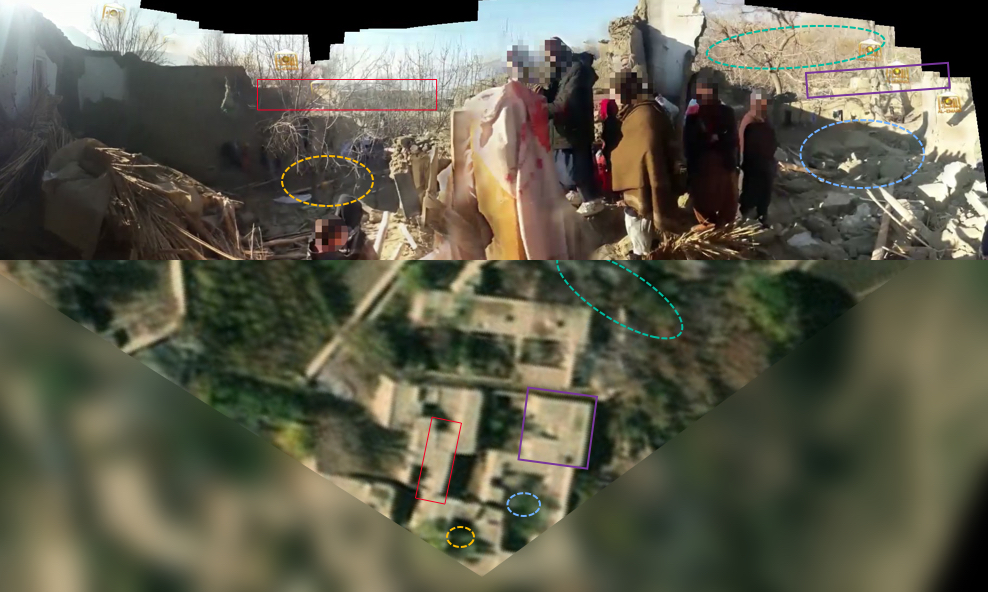 Among the many details that apparently correspond with the location, is one distinctive building as shown in the image below. 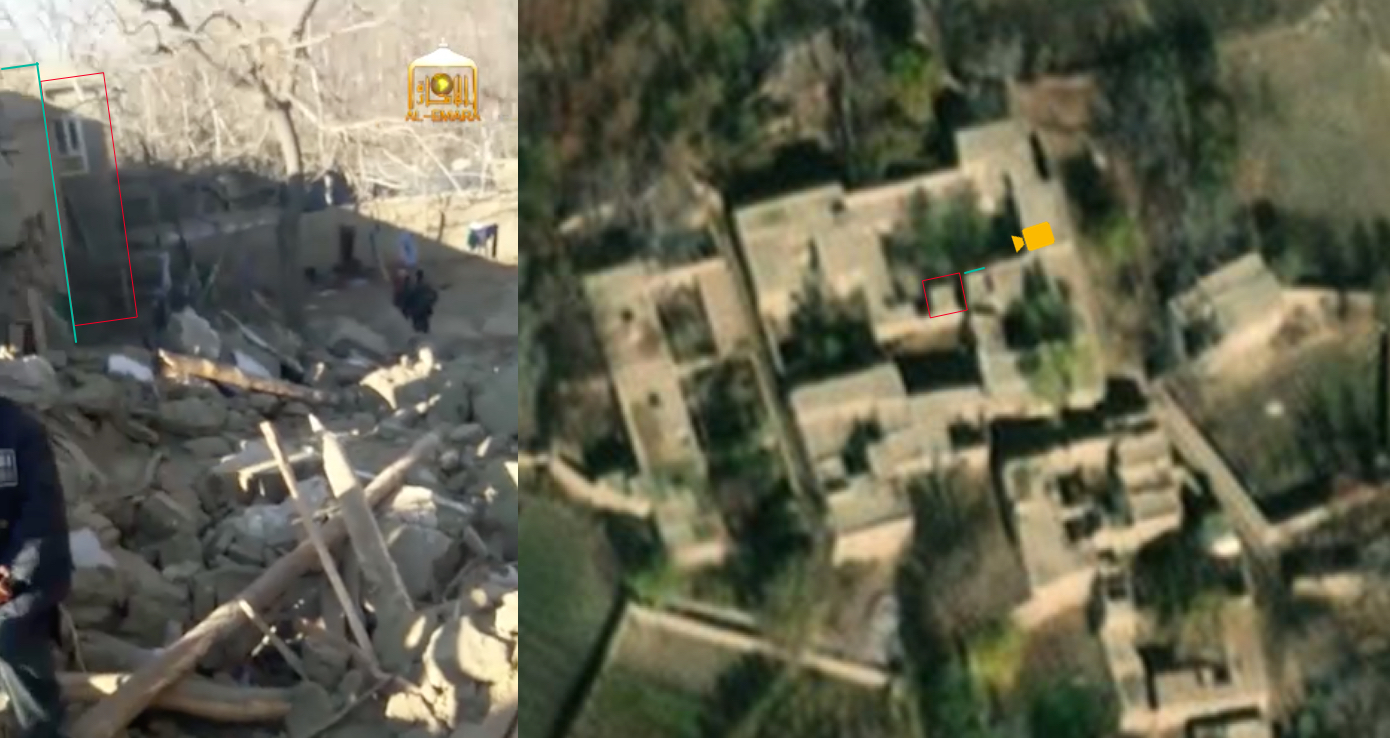 Comparison between video still and satellite imagery. | Camera icon made by Kiranshastry from www.flaticon.com

In the search for satellite imagery taken after the alleged air strike, a single image is found, captured 5 May 2020. It clearly shows changes in the northeast area of the site. Earlier, in a place where at least two buildings were visible, now only the scarce remains of a single wall is seen. Again, this corresponds to the imagery in the video, where, supposedly, this part of the wall is still intact.

As this satellite image was captured months after the strike, it still doesn’t confirm if this indeed was the location hit by the airstrike. The change could also have been from a later date.

Medium resolution imagery is not ideal for observing these types of events, but often has a more frequent coverage available in public sources and can therefore serve as an alternative. For this location, two Sentinel-2 images captured 23rd and 25th December 2019 exist. Change in the northeast wing of the site can be observed. The coordinates of this site are 34°58’25”N,69°38'25"E.

Satellite imagery captured on the 23rd and 25th showing notable changes in the northeast wing of the site.
| Imagery courtesy of Sentinel-2 / EOS Landviewer

A source by TOLOnews reported that events started on the night of 24 December around 8 pm and continued till the morning of 25 December. However, on observing the timeline of events, this information seems inaccurate. Pictures from the site were already doing rounds on the 24th.

Noticing the changes in imagery between 23rd and 25th December, it is likely that the airstrike might have happened on the night of December 23rd to the 24th.

After putting together all findings, we can say that the “Where” and “When” of the alleged airstrike have probably been answered. The imagery released by various media outlets and social media accounts on 24 December 2019 and the following days closely match with the site near the village of Afghānyah in the Nijrab district, coordinates 34°58’25”N,69°38'25"E. Satellite images captured on the 23rd and 25th of December record changes in the northeast wing between those dates. Since footage from the location had already appeared on the 24th, we might conclude that the strike took place on the night of 23 to 24 December 2019.

The “What” of the event is the hardest to answer. While an initial segment of the Al-Emarah video displays the remains of children, the authenticity of these images is called into question. The floral garlands around the children’s necks in this video, as well as certain other details, show these images may be from an incident that took place in 2018 wherein a ceremony was bombed by the Afghan air force. Hence, it can be corroborated that this case still lacks evidence to prove civilian casualties. This is of significance, as the source of the video is a pro-Taliban channel. In addition, there’s no clear evidence of military conduct from one of the two forces carrying out airstrikes.

Taking media reports and visible site damage into account, the theory of an airstrike cannot be ruled out as a plausible cause of events. Considering the extent of damage and the probability the raid took place at night, civilian casualties are not unlikely.

Now that the timeline of events shows a possible nighttime occurrence from the 23rd to 24th, both strikes reported by the US and Afghan air force cannot be ruled out as being possibly related. The US strike summary lists a strike in Kapisa on December 23, and the Afghan MoD reported an airstrike in Nijrab on December 24.

High-resolution satellite imagery, additional information from Kabul News TV or perhaps more transparency from the US or Afghan forces are required to shed more light on the questions that remain open.

With thanks to Jessica Purkiss for feedback and pointing out the issue regarding the floral garlands, Srishti Rathour for editing, and Bashar Deeb and all others that took part in the crowd-sourced investigation.